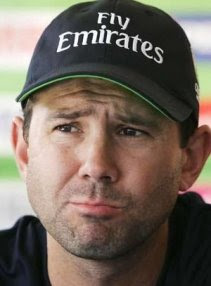 Ricky Ponting throwing his baggy green capped teddy out of his pram after the first Test reminded me that i have often wondered, why it is that the Aussies talk endlessly about 'the whinging poms'? With absolutely no sense of irony at all they whine on and on about it.

When i visited Australia a few years ago i was amazed that from the Taxi driver who picked me up at the airport when i arrived, to the taxi driver who took me back to the airport two weeks later, and every single Australian person i met in between, moaned. Not little moans interspersed with warm words of welcome but endless moans and whinges about; the 'bloody slopes' (a non pc Aussie term for Asians) who 'owned' everything, the 'bloody Government', 'the bloody crap pension', 'the bloody Greek immigrants', 'the bloody Abbos' (a non pc Aussie term for real Aussies), the 'bloody whinging poms' of course and on, and bloody on, and bloody on...

Without fail every time i was introduced to any Aussie they would all say 'oh, another bloody whinging pom' before embarking on their own endless list of moans and gripes.

If the Aussies win the ashes they should wear them with sackcloth to feel more at home.

The Aussies are of course a great sporting nation - as long as they are winning that is. If they don't win then that Tasmania sized chip that they all carry on their shoulders starts to show. Hence Ricky’s tantrum over two minutes lost last week and PM Howards face like a smacked arse when he had to present the Rugby world cup to Martin Johnson in 2003.
Posted by Perry Wilsher at 15:32 No comments: