#UnmissableCall
The New Orleans Saints were denied a chance at Super Bowl glory by one of the worst officiating decisions in football history.
“It’s a judgment call by the officials. I personally have not seen the play,” referee Bill Vinovich said after the blatant pass interference seen around the globe. 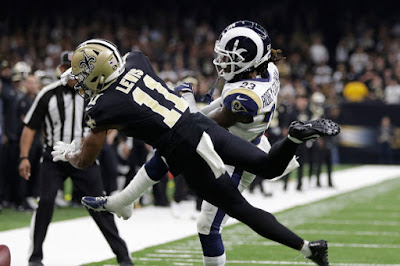 Firstly, this was not a judgement call – it was an ‘unmissable call’ and I strongly suggest it should only be described as such.


Everybody who saw this incident in real time could easily see it was clear, intentional and obvious. Calling it a ‘missed call’ or ‘blown call’ only serves to trivialise it and does not begin to do it justice. It was in truth ‘Unmissable’ and the fact it was apparently ‘missed’ by two experienced referees who were looking right at it raises serious questions that demand answers. Were the referees subject to outside influence or had they been pre-instructed not to flag on any late, potentially game changing, moments? Both these experienced referees knowingly, materially influenced the outcome of the game and someone needs to find out why.


The timing of the deliberate (as admitted) collision so far in advance of the football arriving, combined with the proximity and unobscured view of the two referees, means one must question why both the referees decided independently not to throw their flags. Add this to the two contradictory and indefensible explanations for no flags given at the time – “The ball was tipped” (it wasn't) and “the ball and player arrived at the same time” (they didn't) – and one can only draw the conclusion that this game changing incident has more to it than meets the eye and demands to at least be the subject of a proper investigation.


Sole discretion also means sole responsibility. There is a clear ‘duty of care’ obligation on the commissioner to maintain the integrity of the NFL as a business. At the very least he must be seen to be asking the relevant questions of the key individuals, or risk being accused of bringing the game into disrepute.
This issue needs to be addressed now, otherwise the ‘#Unmissablecall’ scandal will make the Superbowl missable for millions of disillusioned fans.
Posted by Perry Wilsher at 09:20